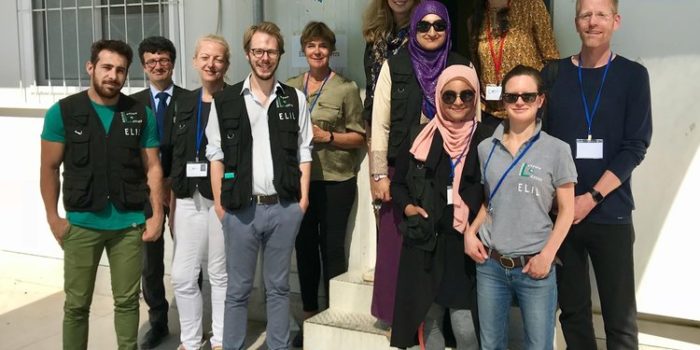 Since that time, along with a small permanent staff, almost 150 volunteer asylum lawyers from 17 countries have provided free legal assistance to more than 9,000 people, most of whom are from Syria, Iraq or Afghanistan. ELIL is the largest provider of legal assistance to asylum seekers on Lesvos and is the primary provider of legal assistance to unaccompanied minors who have been incorrectly registered as adults (over 500 cases in total) and asylum seekers in detention (almost 200 cases in total). In addition to other services, ELIL also helps reunite families by assisting with family reunification applications under the Dublin Regulation.

“ELIL is engaged in relevant and critical peace and justice activism,” said Greet Vanaerschot, secretary general of Pax Christi International. “Here in Europe, we have been shocked to witness a political debate that is demonising migrants, asylum seekers and refugees, contrary to the vision of a Europe which respects human dignity and fundamental rights. It is gratifying and inspirational to see the number of lives ELIL has touched in such a short time and the number of voluntary hours they give. As people of faith, Pax Christi members believe we have a responsibility to welcome, care and advocate for refugees, migrants and asylum seekers; we celebrate ELIL and its profoundly important work.”
Established in 1988, the Pax Christi International Peace Award is funded by the Cardinal Bernardus Alfrink Peace Fund and honours contemporary individuals and organisations who make a stand for peace, justice and nonviolence in different parts of the world.
____________
For more information, contact:
Judy Coode of Pax Christi International at j.coode@paxchristi.net, +1-202-425-0576
____________